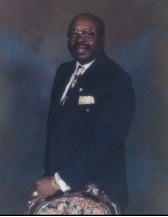 Celebration of Life Services for Retired Presiding Elder David L. Moore will be held on Saturday October 04, 2014 at 12:00PM at the Wilkinson County High School Gymnasium at 12516 GA Hwy 57, Irwinton. The Rt. Reverend John Hurst Adams will officate. Interment will follow at the Mt. Carmel Cemetery in Irwinton.

Retired Presiding Elder (Coach) David L. Moore of Irwinton, GA, “went to be with the Lord,” on Saturday, September 27, 2014, at home surrounded by his loving family.  Elder Moore was born April 9,1939.   He was the eldest son of the late Rev. Joe David Moore and Mary Smith Moore of Franklin, Tennessee.

He was a member of St Phillip A.M.E. Church, Toombsboro, Georgia, where he has served as Church School Superintendent, member of the Trustee Board, member of the choir, and with other activities where he was needed.

He was educated in the elementary and high school in Franklin, Tennessee and continued his education at Daniel Payne College in Birmingham, Alabama earning an AA Degree in Religious Education and Theology. He received a BS Degree in Physical Education at Paul Quinn in Waco, Texas and a Master’s Degree in Administration and supervision from Georgia College, Milledgeville, GA. He has done further studies at North Texas State College, Denton, Texas and Turner Theological Seminary Satellite in Macon, Georgia.

He was called into the ministry while still serving as an educator and coach in the public schools system. His assignments included the Thomas Grove Circuit which included Thomas Grove A.M.E. Church, Claxton, Georgia and St. John A.M.E. Church in Pembroke, Georgia. He also served as pastor of St. Paul A.M.E. Church, Sandersville, Georgia and Bethel A.M.E. Church, Quitman, Georgia. He answered to a higher calling to become the Presiding Elder of the Thomasville /Bainbridge District, South Conference in 19 and retired as Presiding Elder of the Greater Griffin District, Macon Conference in 2012.

Rev. Moore was one the winningest coaches in Georgia. He was honored in Atlanta, Georgia by the Basketball Tip-Off Club for reaching the milestone winning 500 games. He was elected Georgia Coach of the Year for 18 years out of 32 years of his coaching. He is a member of Georgia Coaches Sports Hall of Fame, a life member of NEA and holds membership in many other organizations. He is currently a member of the Wilkinson County Board of Education.

To order memorial trees or send flowers to the family in memory of Presiding Elder David Moore, please visit our flower store.