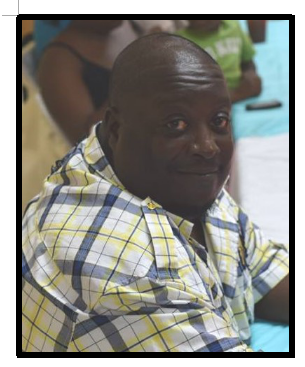 On February 21, 2017, God called Guy Johnson home to occupy the room that was prepared for him. Though Guy will be missed by family and friends at his earthly home, those that knew Guy can only imagine the laugh-fest of joy that is transpiring at his new heavenly home. There wasn’t a gathering or room that Guy couldn’t brighten with his jokes and spontaneous sayings. Fond memories of Guy will forever live with those that crossed paths with him. May those memories bring comfort and peace to everyone who morns his absence.

Guy Johnson was born in Macon, GA on August 24, 1971 to the late Mr. Nathaniel Strange of Toomsboro, GA and the late Ms. Patricia Johnson Mallory of Gordon, GA. He lived his childhood and early adult life in Gordon, GA where he established many lifelong friendships on College Street and Shinholster Street. He received his education through the Wilkinson County Public School System and worked for several companies that specialized in kaolin production, painting and roofing. Guy later moved to Macon, GA where he lived his final days among the city lights and along the river banks.

Mr. Johnson will be placed in the sanctuary of Shiloh Baptist Church one hour prior to service hour. Viewing will be held on Friday February 24, 2017 at Wilkinson County Memorial Chapel from 1:00-7:00 PM.

To order memorial trees or send flowers to the family in memory of Guy Johnson, please visit our flower store.